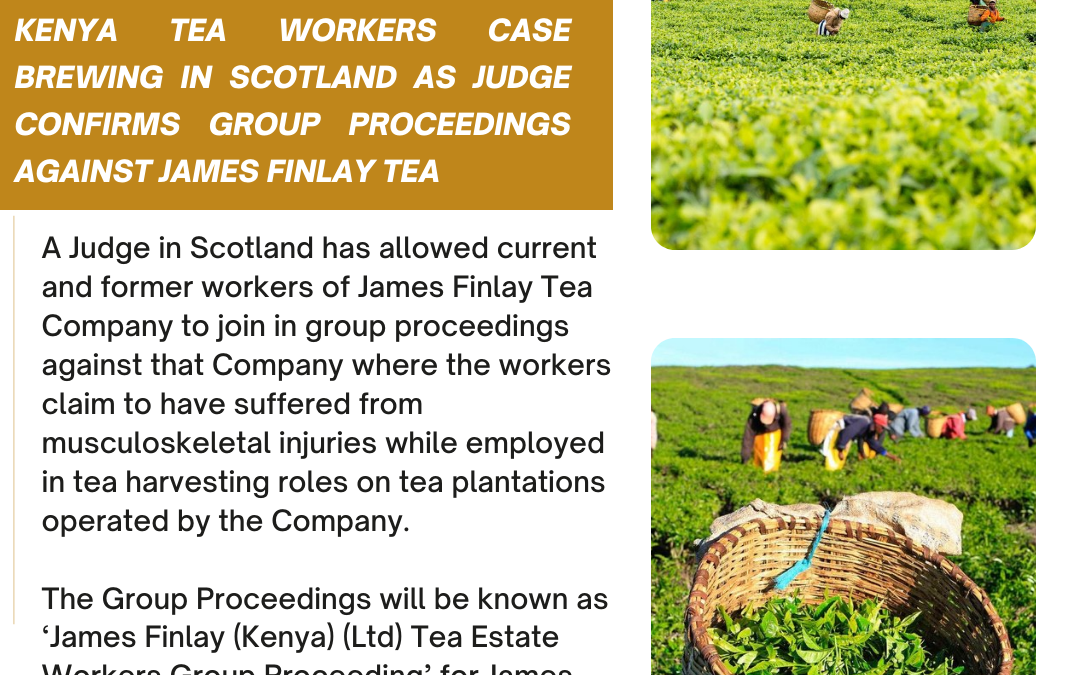 At a remote hearing that took place on 16th February 2022 before the Scottish Court of Session (Edinburgh) the Judge Lord Weir granted an order for the Group action to proceed.

Hundreds of Kenyan workers at a Scottish tea producer that supplies Starbucks, Tesco and Sainsbury’s were deprived of maternity leave and suitable lavatory facilities, a court has heard.

Finlays, which is based in Aberdeen, is said to have subjected workers to dangerous and damaging conditions on its tea farms and is now facing a multimillion-pound negligence action. The group litigation, brought by Kenyan former and current employees, is being heard in the Court of Session in Edinburgh, Scotland’s highest civil court, before the judge, Lord Weir.

Queen’s Counsel Andrew Smith QC made submissions to the Court regarding the appointment of a suitable Representative Party to figurehead the group of claimants and to represent the interests of the entire group.

Lord Weir thereafter allowed the appointment of retired Queen’s Counsel Colin McEachran QC as a Representative Party for the group of claimants suing the Company,

Lord Weir also directed that Thompsons Solicitors Scotland provide the Court with an updated group register of claimants within the next 14 days noting that after three months of advertising, no new claimants will be allowed to join the case.

Finlays, founded in Scotland in the 18th century, is facing multiple allegations, including about the treatment of its pregnant farmworkers. During a procedural hearing yesterday, Andrew Smith, QC, said: “We have workers without maternity leave who are being required to work in extremely difficult circumstances — ie being pregnant — without the provision of suitable sanitation facilities.”

He also described how workers suffered injuries from plucking tea with their hands and from carrying heavy machinery and baskets weighing about 15kg over difficult terrain. Smith said the farms operated with “a requirement to pick a minimum amount of tea before one is eligible for payment”.

Finlays had tried to block the group litigation — known as a class action in other jurisdictions — by claiming it did not meet Scottish requirements and should be heard in Kenya but Lord Weir granted the application last month.

The Finlays group is one of the world’s biggest producers of tea and coffee. It operates on five continents and can trace its origins back to James Finlay, a cotton merchant who founded the business in Scotland in 1750.

There are more than 800 workers involved in the action, most of whom are former tea pickers who say they were injured while working for James Finlay (Kenya). A previous court hearing had heard that the pickers claim they were routinely asked to work up to 12 hours a day without a break, for six days a week, earning an average monthly wage of £100 in 2017.

One woman, Emily Chepkurui Sang, 47, said she worked 12-hour shifts with no breaks and was recently retired on medical grounds. She told BBC Scotland: “The health problems are a result of the work I was doing. I don’t know what I can do but I want justice.”

Mr Onyango said the number of people involved in the case could rise to 1,500 if it is allowed to proceed.

“We are determined to see that justice is served to the tea workers. There is no safety net in Kenya, unfortunately, and if they have lost their job, most of them are the main breadwinners in the family and you will find that the families are left living a life of abject poverty,” he said.

“We see this as the very last hope that they have of being able to salvage some parts of their dignity and the life that they ought to have lived, had they not been subjected to these injuries.”

The case will be continued on a date to be advised by the Scottish Court in the next couple of months once the procedural requirements of the last hearing have been met by the parties. The case is being supported in Kenya by a local human rights campaign group Justice and Environment Foundation in Nakuru. 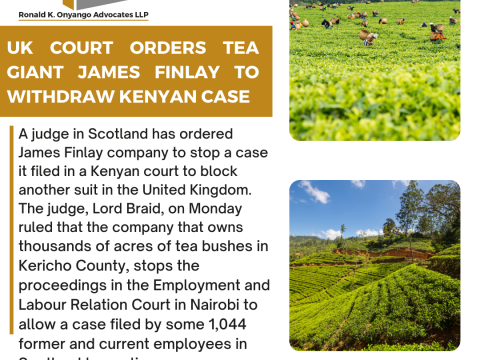 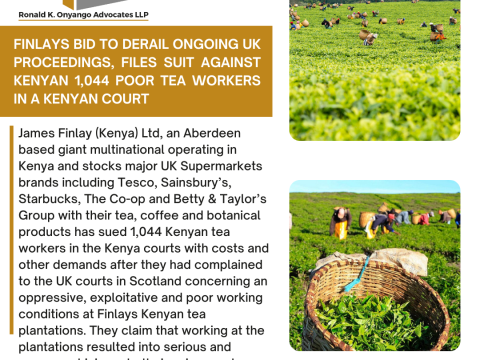 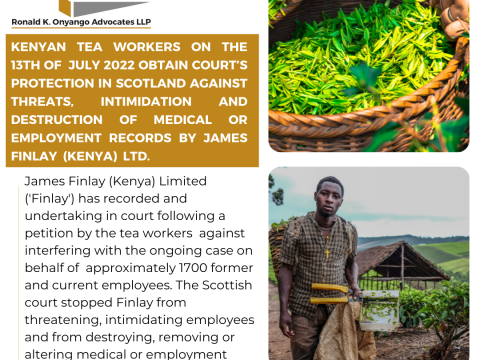